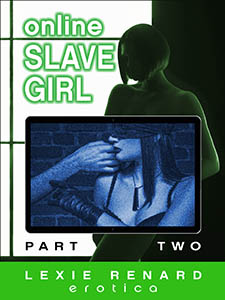 He kisses her passionately, lying her down on the blankets and gently nudging his cock inside her. It only takes a moment for it to glide all the way in. He fucks her deeply, kissing her lips, her face, her breasts. She wraps her slim legs around him, angling him deeper. She whispers something into his ear.

Flipping her over, he smacks her ass hard, adding to the bright marks. He tilts her toward him and plunges into her tight pussy, watching his cock ravish her little hole, splitting his concentration between spanking and fucking.

He stops smacking, grabs her hips and impales her hard. Her back arches and she appears

to be crying out or muttering something. Her face is smiling, relaxed, blissful.

Posted by Lexie Renard at 13:28 No comments:

Michelle tries to spice up her boring life by going to experimental theatre events, and is given a ticket to Sorceress Sybella Live - featuring graphic sex, witchcraft, and spirit conjuring. She doesn't know what sort of show this is, but desperately wishes that she were the one being ravished onstage. 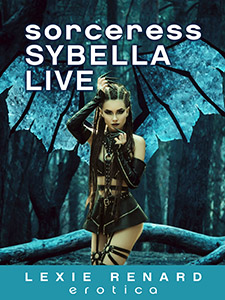 ***
“You cannot have this girl,” the Sorceress said, her voice shaking slightly. She tried to step in front of the blonde. Instantly her hands flew above her head, she floated straight up into the air and hung from the back of the stage.


“We won't be needing you for a little while,” the red demon said. The beasts admired their prey, circling the pale, shaking girl. She watched in horror as the orange demon’s erection became apparent. Her eyes widened as he approached her with his thick, ten inch rod.


“So alluring, these fragile little animals. Beautiful, really.” The red fiend grabbed her and laid her down on the cot, pinning her shoulders. “Be a good little sacrifice,” he growled, “I bet you'll even enjoy it.”
***
Ever been to a show where a sacrifice is pulled from the audience and gets fucked hard by two giant demons?
https://www.amazon.com/dp/B0725FXJCH
https://www.kobo.com/ca/en/ebook/sorceress-sybella-live
Grab a naughty little 99 cent erotica story today!
Posted by Lexie Renard at 12:23 No comments:

Please search for me on Kobo here:
https://www.kobo.com/ca/en/search?query=Lexie%20Renard&fcsearchfield=Author

I'll be adding stories there as I go.

Want your name in an upcoming erotica story? Join my email list http://eepurl.com/cGaOPb then email lexie.renard@gmail.com with your name - I'll do my best to use it in a story soon! Sleazy star, or bit part? Who knows!

I've had a few fabulous reviews so far- if you like my smutty tales, please review them from wherever you found them. I really appreciate it!

Posted by Lexie Renard at 21:19 No comments:

Trish donates her body to a secret sex club to earn money for university, and is thrilled at the thought of being used as a sex toy, even though she won't remember. Richard is a businessman who wants to get in touch with his primal, sexual side. In the centre of downtown Toronto, there are sex dolls in the basement, waiting in stasis for you... 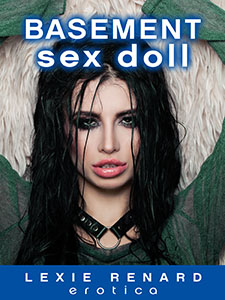 I'll tell you a secret... I intended the woman in this story to be a buxom blonde, but then I found this pic on the stock photo site and absolutely fell in lust with her. I might write two or three follow up stories just so I can use more photos of her. Rawr!
Click "Look Inside" on the Amazon sites for a preview. Please be sure to get on my email list for updates every 3 - 4 weeks on new releases. http://eepurl.com/cGaOPb
I'm currently working on Sex Sorceress Live, Online Slave Girl - Part Two, and Dominatrix Daily. Thanks for staying in touch!